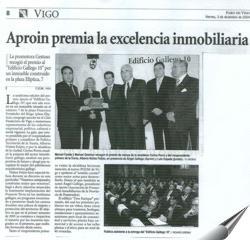 The development promoter Gestoso INC. collected the prize to the “Galician Building 10” by a building built in the Elliptic Square 7 The eleventh edition of the prize Aproin to the “Galician Building 10”, that this year was to a building situated in the number 7 of the plaza Francisco Fernández del Riego Last night in the financial Club of Vigo a lot of representatives of the collective business, political, cultural and social from Vigo were congregated. The gala, that was presided by the first vice president and Conselleiro of Territorial Politics of the Xunta, Alberto Núñez Feijóo, and by the mayor of the city, Corina Porro, in this act was praised the strength of the Galician real estate sector, analyzed its perspectives of future and the best of the Galician architectural patrimony was claimed. Núñez Feijóo did special emphasis during its speech, in this individual. “ Our ancestors built better than us”, he said, while he announced the imminent establishment of the Proxecto Terra in the galician Institutes, a program directed to promote since the educational institutions a culture of respect and protection of the territory. The objective is that in the first semester of 2005 already comience to be given the agenda by the teachers integrated in the project, that will receive formation from January.
So much the first vice president as the mayor did mention to the new PGOM of Vigo and they appealed to the “common sense” like better arms to develop it. Angel Gallego shared this desire, president of Aproin (Association of real estate Developers of the Province of Pontevedra).
The building rewarded“Mr. Enrique”, of which people who was there could see a video, and the building has 5 basements for junk rooms, wine cellars, installations and parking; semibassement for community local and services; commercial ground floor and a access to the eight floors and to finish it´s the penthouse,in a total 40 apartments.